In North Carolina, “Paylaking” pays off. Picture a 4-acre pond that, with proper management, can support up to 40,000 pounds of fat carp. Lease that pond for three years, pay for tanker trucks full of young carp to be delivered from the Great Lakes area, and run carp tournaments. “Best legal Redneck gambling around.” Redneck, by the way, is what our carp acquaintances called themselves, and they said it with pride.

But I’m getting ahead of myself.

Driving up the backroad at night, my daughter and I saw a small lake ringed by spotlights. It looked like a lit-up fairy ring, but what was it for?

The next evening, we stopped by to find out. We were greeted by a dad and teenage son. Each held a slice of pizza, and sat by three rods at the ready in holders. The dad gestured with his slice towards a pizza box. “Domino’s delivers,” he noted, and we all laughed.

Putting his pizza aside, he gave us an informal “Intro to Competitive Carp Fishing,” explaining how tournaments are run. Did we know the tournaments were both big recreation and big business? That the business part includes gambling, and is legal in North Carolina? Our reaction? “Who would have guessed?”

However, we couldn’t guess why only two people were fishing that night. Evidently carp fishers and carp were both recovering from an all-night tournament held a couple days earlier. The dad suggested that we visit the paylake down the road instead. Maybe more was going on there.

Before heading the next night to D&R, we strategized. Claire’s car is a Prius. “I can’t drive a Prius down there.” She had a point. This was Ford pickup and beater sedan country. “We could park it and walk in,” we joked, and then I advised, “Wear your most nondescript T-shirt and jeans,” She picked an old shirt from a church camp job. Short of saying “Methodist” instead of “Baptist,” it looked like just the ticket. We headed to the paylake.

Once again, although a tournament was scheduled, there were only two people there, one a fisher and the other, the paylake lease manager. We introduced ourselves as ignorant, but curious, visitors. Earle, the manager, grabbed six rods and holders, and, while dodging dogs, set them up for Claire and me.

Baiting the hooks followed. In a five-gallon bucket, Earle mixed a pungent combination of cornmeal, oatmeal, water, Karo syrup, and flavoring. What is carp bait flavored with? Good question. Earle showed us a few of the hundreds to choose from, but didn’t tell us which he picked.

Earle next put corn niblets on each jigged hook, grabbed a handful of bait, and formed a long marshmallow of bait around the hooks. Bait and hooks? Check.  Earle launched each rod’s baited hooks into the pond.

In theory, once in the lake, the bait falls off on top of the hooks, and in the process of eating the bait, the carp gets hooked. In practice, the fish seemed to be recovering from another all-night fishing tournament two nights earlier. Too bad. Had one been hooked, the line would have been zinging out of the reel. We would have been fighting hard to bring the carp in for weighing, hearts racing, and any expletives falling short of the magnitude of the rush that is carp fishing.

Paylake carp average around twenty pounds, with some weighing up to forty. After they’re weighed, they go back into the pond. This cycle leaves the fish pretty well-informed about how to approach a dinner of bait. Between tournaments, they grow even bigger.

No matter that the carp weren’t cooperating. We watched the rods and visited with Earle. He educated us on the ordering and delivery of carp from the Great Lakes area. He made it clear that the financial and logistical concerns of running a paylake are multifaceted and continual. On the subject of supply and demand, he noted that when the Jews have “that holiday,” the price of carp goes wacky. “Carp? Jews?” I wondered, and then made the connection between Passover, gefilte fish, and, oh yeah, carp.

Earle treated us to fresh grilled livermush sandwiches served with pop. While we ate, he told about his cousin drowning in a nearby lake, recounted the history of the local hot dog stand, and recited a list various jobs he’d held over the years.

Claire and I were in unfamiliar territory, made comfortable by Earle’s hospitality. “Southern hospitality” is one cliche. Another is “Redneck.” I’ve been trained not to use the term, but “Redneck” was how Earle described himself and the area.  The town and area was home to him and his kin. He moved away for a while, but came back and stayed. He knew all the stories. We heard a fraction of them. 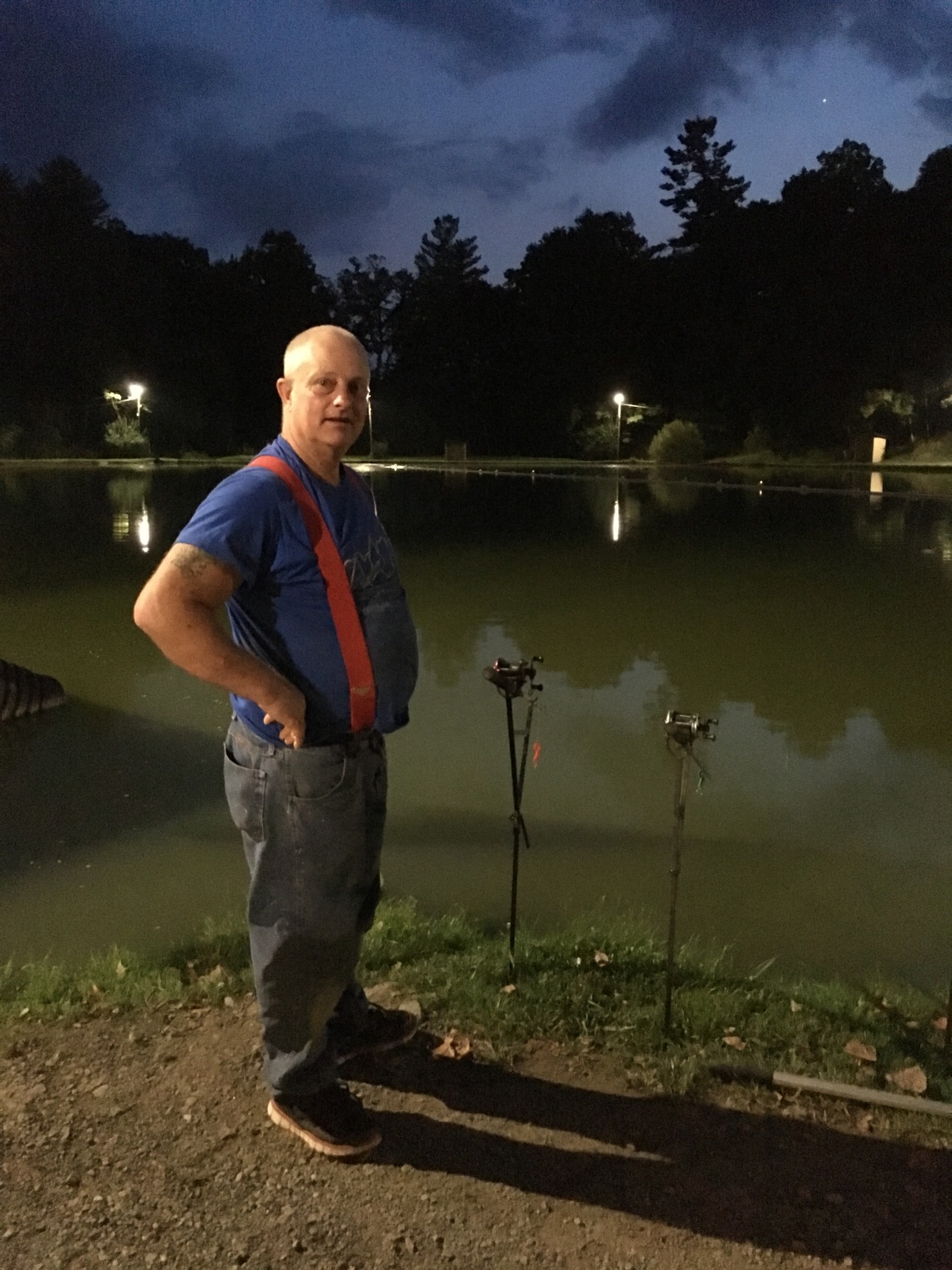 He had no questions for us.

The sun went down. A fingernail moon appeared, as did the mosquitoes. Earle went and grabbed the bug dope. Sugar, the dog, whined for attention. The rod tips remained still. Conversation ebbed. We thanked Earle, and headed home.

NOTE: Although not totally accurate, this entry was written from a real experience. Names, including the dog’s, were changed.