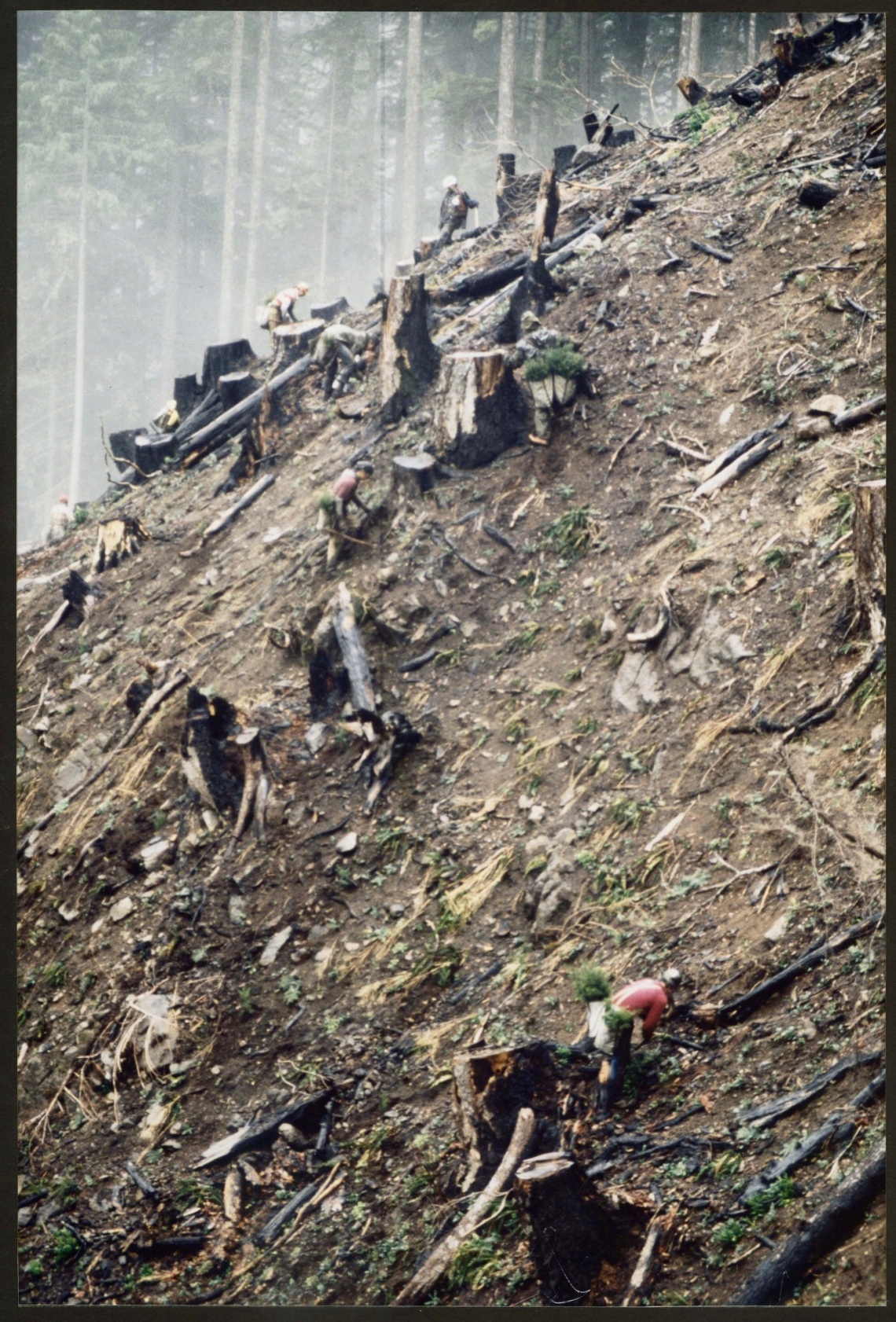 Climb out of the crummy. Bag up. Grab a hoedad. Head down the slopes, lining out, planting on a grid. Hit the bottom. Reverse. Plant back up the slopes. Envy the deer that just left you in the dust…no, make that mud. At the end of the day, the ride home and a hot meal waits. Sleep comes easily, then, again, it’s pre-dawn and time to go to work.

Hoedads Reunion, forty years later. Big hugs. Conversations ebb, flow, and pave new channels. We visit while we shuck corn, grill salmon, and pump the keg. Then we fill our plates from tables with more food than yellow jackets can land on.

We met up with friends we haven’t seen for years. We talked of those who couldn’t attend, and went through the “Whatever happened to’s.” In the ten years between this reunion and the last, some members died.  We still looked around, expecting to see them, wanting to see them. We are a sea of grey hair. It might be time to have reunions every five years. Carpe diem.

Yup, we were kinda famous, with a dash of “Legends in our own minds,” as the fine print says.

The “Hoedads Reforestation Cooperative…was a worker-owned tree planting and forestry labor cooperative based in Eugene, Oregon… It was active throughout the American West from 1971 to 1994…they were (the) country’s largest worker-owned cooperative (citation needed) …noted for their success in applying the cooperative model successfully to tree planting. …also known for their experimentation with and early embrace of concepts such as environmentalism, feminism, and alternative economics. (Wikipedia.) 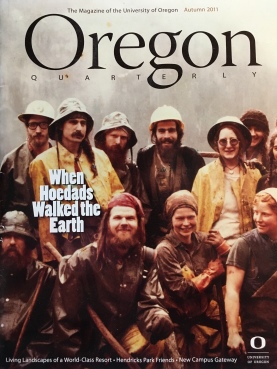 At this point, I’m at a loss at what else to write. How can I tell you what Hoedads meant to me? What being a crew member taught me? And why someone who hates manual labor and loves creature comforts would set herself up for weeks of back-breaking work and doing without?

A hot shower after two weeks without? Nirvana.

Dinner at the end of a work day? Inhale!

I would have done it for the larches. Larches are deciduous conifers. In the fall, their needles turn, and then drop in an early snowstorm of brilliant yellow. In the spring, new almost-chartreuse needles emerge, contrasting with the green-black backdrop of hanging lichen. With the early morning light silhouetting both, their beauty is quietly breath-taking. Seeing them was my reward for going to work.

Hoedads was great for learning practicalities. When I planted by the tree, I finally learned the multiplication tables. Learning not to “ride the clutch” earned me the privilege of driving Ruby. For a hobby, I collected discarded Copenhagen lids from the roadside. With a little polishing, their shiny embossed design was pretty appealing.

What about people skills? Live with up to twenty-four people, twenty-four hours a day, for up to three weeks? Enough material there for a separate blog entry.

Old snapshots of treeplanting days and nights spring to mind. Have you ever camped out where it’s pitch black at night? In the kind of darkness that could be only as long as your outstretched arm, or go on for infinity? A darkness so profound and deep it’s immeasurable? If you stand in that dark with a fellow crew member, you may end up arguing about the nature of the material world.

On one long contract, a few members were constantly sick, missing day after day of work. Those members argued for crew “health insurance” in the form of others giving up part of their wages to the sick members. We were a cooperative. Did the crew vote to give up a chunk of their wages to equalize pay with the members who were missing the lucrative spring work?

Some days were gifts. Once, when the temperature rose too high for tree roots to stay moist, my crew was “sunned out” of work. Other crew members left for a day off in town. I stayed in camp, delighted to have the place to myself. While heating up water, I rolled up the sides of the yurt to let in the sun. When there was enough hot water to fill two tubs for wash and rinse, I  lowered myself into the first tub. Warm sun on my back, it was the most sumptuous bath of my life.

When ticks first hatch in Montana, they are everywhere. Ubiquitous. We’re talking ticks per square inch. They were so bad, my crew made a policy of “No tick check, no crummy ride home.” Before entering the crummy, each planter removed enough clothing to be inspected and ensure no ticks got a ride back to camp. One night off, the crew went to town. At the local tavern, my dance partner asked, “Is it true your crew…umm…strips to inspect for ticks?” Without a thought, I asked back, “How else would we find all of them?” That was the end of that.

Margaret Alderdice was on that Montana contract. She and I clicked. We argued companionably. We noticed similar things. When we saw a joke, all we had to do was look at each other, and the laughter was immediate. After she left Hoedads, I lost track of her, which I still regret.

Miserable days were common in treeplanting. One day, Margaret and I planted side by side in gumbo mud so bad each step forward was a minor excavation. Next to us, the inspector leaned on his shovel and asked, “What are you two doing here planting trees? Why aren’t you two working in libraries?” I’d already asked myself the first question. The second question got to me. Who was this guy to put into words what I hadn’t been able put my finger on? Too ticked off at him to reply, I sank my hoedad into yet one more spot of gumbo.

A year or two later, I got my first job as a librarian.

Can I explain Hoedads and treeplanting? No. Only a very good writer would have the ability to give readers a stab at that experience. I’m limited to “You had to have been there.” If you want to know more about it, find a steep clearcut. Go to the bottom, and then up again. If that’s impractical, there’ll be another reunion. I hope it’s in five years, not ten. If you want to come along, let me know.